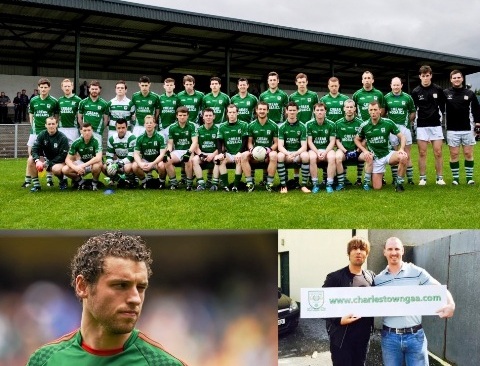 The Charlestown Sarsfields Club was founded in 1888. The club has a long and proud history and tradition in Mayo GAA circles and continues to make its presence felt and punch above its weight on the playing fields.

The Club have top facilities with Fr OHara Park the obvious jewel in the crown as it remains one of the finest playing surfaces in Mayo and beyond. Fr OHara Park was officially opened in 1953 and was named after Fr Eddie OHara a man who spread the gospel of GAA in the community at the time.

Fr. Eddie left a rich legacy and the field has been developed and improved down through the decades thanks in no small measure to the work and vision of some truly great club people. The club have four top class dressing rooms which were unveiled in 2004, replacing the previous ones which served the club so well but had fallen into a state of disrepair.

On the playing fields, the Sarsfields have always contended for top honours. The club has won several County Junior and Intermediate Championships in its stellar history. They also managed to win two county senior leagues in 1995 and 2009 which were great achievements in themselves but the undoubted highlight have been the three county senior championships won in 1902, 2001 and 2009 and the Connacht title in 2001.