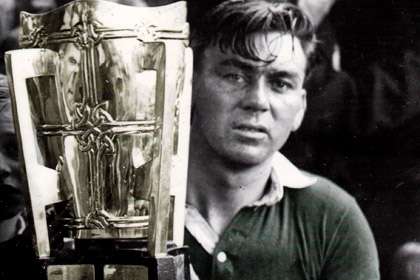 Mick Mackey; one of the greats.

Ahane GAA is a Gaelic Athletic Association club located in the Ahane, Castleconnell and Montpelier areas of east County Limerick.
The club fields teams in both hurling and football and historically is regarded as one of the great clubs of Limerick.

Ahane's greatest players were the Mackey brothers, Mick and John and Jackie Power among others. In their day, they defeated all-comers in Limerick and in the adjoining counties of Tipperary and Cork whose clubs they successfully challenged in many church tournaments during their greatest period of domination. A few of the Ahane players won the All-Ireland Senior hurling championship in 1934, 1936 and 1940 with Limerick, their leader being the peerless Mick Mackey, regarded as one of Ireland's greatest hurlers of all time. They won 15 Limerick Senior Hurling Championships in the 1930s and 1940s and also won 5 Limerick Senior Football Championships during this era.

More recently Ahane have been represented at intercounty level by the Moran brothers Ollie and Niall. Their fans can often be heard to use the famous cheer "Come on Ahane the spuds are boiling"