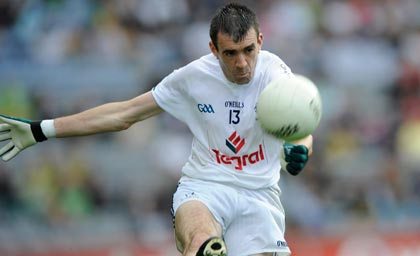 Allenwood G.F.C. is a Gaelic football club based in Allenwood, County Kildare.Founded in 1956, club colours are sky blue and navy.

Allenwood was the winner of the Kildare Senior Football Championship in 2004 and Club of the Year in 1974. It is the home club of serial Kildare Player of the Year Johnny Doyle.

Allenwood GFC was founded in 1956 by Sean Tierney and Frank Harte, a former chairman of the Sligo county board and a local camp supervisor with Bord na Móna. Allenwood players formerly played with Ballyteague, Robertstown and the now dormant Allen club. The club played at McNally's field, Walshe's field, and Lullymore before moving to Heather Park (now Sean Tierney Park). Allenwood installed the first set of floodlights in Kildare in 1999. The clubhouse was initially situated in Allenwood South, close to the banks of the Grand Canal, before moving to its current location in 1970.