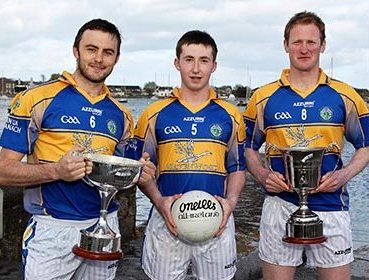 Rinn Ó gCuanach CLG is a Gaelic Athletic Association club based in the Irish speaking (Gaeltacht) area of Ring, County Waterford. Founded in 1890, club colours are blue and gold. The club enters teams of both GAA codes each year, which includes two adult Gaelic football teams and two adult Hurling teams in the Waterford County Championships. It is one of a handful of dual clubs at senior level in the county, competing in the Senior Hurling and Senior Football championships. The club's second string teams take part in the Waterford Junior Hurling & Football championships.

The club has won the County Intermediate Football Championship twice, 1996 and 2005. De La Salle were overcome in both these finals. In June 2008, An Rinn captured the coveted Comórtas Peile na Gaeltachta title for the first time in the club's history. Comórtas Peile na Gaeltachta is the national tournament of the Irish speaking regions and features some of the top senior intercounty football players from Kerry, Cork, Galway, Donegal, Waterford, Mayo and Meath. The 2008 tournament was staged by the Naomh Columba club in Gleann Colm Cille, County Donegal. En route to this historic achievement, An Rinn accounted for the Béal Átha an Ghaorthaidh from Cork, Laochra Loch Laoi from Belfast, and Naomh Mhuire from Donegal before defeating Piarsaigh na Dromaide from County Kerry in the final