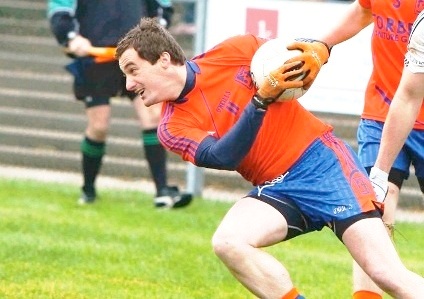 Brian McGuigan in action for Ardboe

Based in east County Tyrone, Ireland, close to the shores of Lough Neagh. It and Moortown St. Malachy's both draw players from the same parish, Ardboe. The club was formed in 1947 but Gaelic games had existed under different banners from the early 20th century.

The club has won a total of seven Tyrone Senior Football Championships, the last in 1998 when they defeated Omagh.

Other Tyrone senior panelists include McGuigan's sons Brian and Tommy. Kyle Coney was a member of the 2008 Tyrone team that won the All-Ireland Minor Football Championship.

Michael Coney Park is the home ground of Ardboe O'Donovan Rossa GAC, situated on the Kilmascally road near to the main parish centre.

In the 1970s the club constructed the main pavilion building and the surrounding facilities. In the following years new fencing was erected and a new covered stand and terracing to further improve the club's grounds.