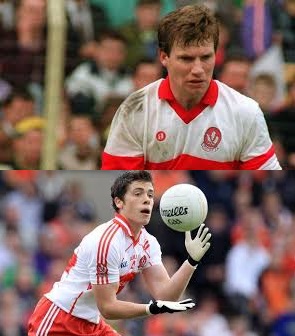 Tony Scullion (above) and Dermot McBride

St. Colm's GAC Ballinascreen, was founded in 1933. The founders were Sean Mac Diarmada, James Conway, Barney Rodgers and Eddie O'Neill and Michael Kelly. St. Colm's started off impressively by winning the first two Derry Senior Football Championships in 1934 and 1935. They followed this with two Derry Senior Hurling Championships in 1938 and 1939. They added a third football championship in 1941. Matt Regan played in all five championship successes. He was a regular on the Derry county team and was the first Derry man to play for Ulster in the Railway Cup.

St. Colm's have won eight Ulster Scór titles and one All-Ireland title, the best performance of any club in the county.

In the centenary year for Derry (1984), St. Colm's won the Og Sport award and the AIB Club of the Year award. Hurling Ballinascreen are one of the top senior sides in the county. However, they have failed to secure the championship since the 1930s. They have won the league as recently as 2005 and played in a county final in 2003. Why the huge underage success that the club has experienced over the last twenty years has yet to translate into a championship winning side is a question which puzzles many in Derry GAA.