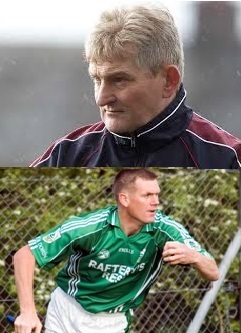 Gerry Helebert in the club colours and above, Noel Lane

Ballinderreen is a Gaelic Athletic Association club that is located in Ballinderreen in south County Galway, Ireland. The club was founded in 1884 in the first year of the GAA. The parish already was deeply rooted in hurling before the foundation of the GAA.

The club is situated in south galway, and along with neighbouring clubs Ardrahan, Kinvara, Gort, Craughwell and Loughrea, it is considered to be the strongest hurling stronghold in Galway and indeed in Ireland.

Ballinderreen has produced many intercounty hurlers, some of whom are considered to be among the greats of the game.
These include:

The county has little success in terms of senior championship silverware , but it has been very successful in juvenille age groups. Most recently the club's minor squad captured the minor 'C' championship after defeating Salthill in 2015.

In 2010 the club's junior b's captured the county title. They then went on to defeat Thurles Sarsfields in the semi final to meet donneraile from County Cork in the final. They went on to win on a score line of 2-6 to 0-5.

The club's senior team last advanced as far as the Galway Senior Hurling Championship county final in 1978, with galway legend Noel Lane in the attack. They met neighbours and old rivals, Ardrahan in the decider. The game was held in Ballinasloe, with the game eventually ending in a draw on a scoreline of Ballinderreen 0-16, Ardrahan 2-10. The replay was held later , with Ardrahan winning their 11th title after extra time on a scoreline of Ardrahan 2-18 Ballinderreen 2-14.