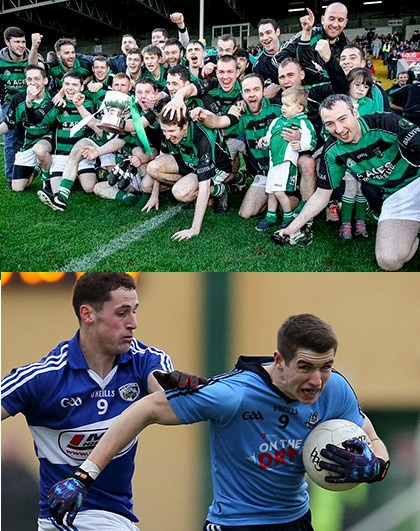 Celebrating the 2014 final and (below) James Finn competing against Dublin.

The club colours are green and white. The club is situated just outside Portlaoise.

Ballyfin have won the Laois Intermediate Hurling Championship on 3 occasions; in 1970 defeating Ballinakill, in 1985 defeating Clonaslee and most recently in 2006 defeating Colt.

In 1972 they made their one and only appearance in the Laois Senior Hurling Championship final, losing out to Borris-in-Ossory.

Ballyfin, in addition to competing at intermediate level, also field a junior B hurling team. This is courtesy of their 1999 final victory over Ballylinan in the Laois Junior "C" Hurling Championship.

Ballyfin also have gaelic football teams and compete in the senior and junior C grades.

In 2008 and 2013 they won the Laois All-County Football League Division 3 title.

In a historic 2014, Ballyfin defeated Timahoe in the final to win their first ever Laois Intermediate Football Championship title and gain senior status in football for the first time ever in 2015.