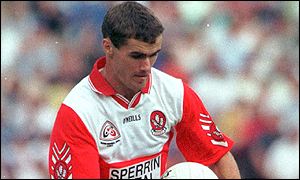 St Mary's Banagher GAC (Irish: CLG Naomh Mhuire Beannchar) is a Gaelic Athletic Association club based in the Feeny / Park area of County Londonderry, Northern Ireland. The club is a member of the Derry GAA. Banagher is a dual club and currently cater for Gaelic football, Hurling and Camogie. The club motto is the Irish Ni neart go misneach, which translates as "No strength like courage".

Underage teams up to U-12's play in North Derry league and championships, from U-14 upwards teams compete in All-Derry competitions. The club was formed in 1965, when St Mary's Park and St Joseph's Banagher amalgamated.