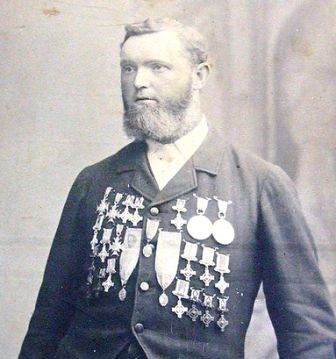 Maurice Davin, the first President of the GAA

Carrick Davins GAA is a Gaelic Athletic Association club located in the town of Carrick-on-Suir in south County Tipperary in Ireland. It is one of three GAA clubs in the town, one of which, St Molleran's, is in County Waterford in the southern suburb of Carrickbeg across the River Suir. The club plays both hurling and Gaelic football but is predominantly a hurling club. The club enjoys a keen rivalry with Carrick Swans GAA. The club is named in honour of Maurice Davin, the first President of the GAA, who lived near the town.

The club was founded in 1922. In the early years there was a leaning towards the football side of the Association, and green and white jerseys borrowed from neighbours Grangemockler were worn until the 1930s when Cork red was chosen, hence the nickname The Red Rebels. In the early 1930s the club registered as The Davins in honor of the Davin brothers, founders of the GAA.

In 2009, Carrick Davins won the Tipperary Intermediate Hurling Championship title which saw them return to the Senior Grade. They reached a South Tipperary Senior Hurling final in 2011, where they played Mullinahone.