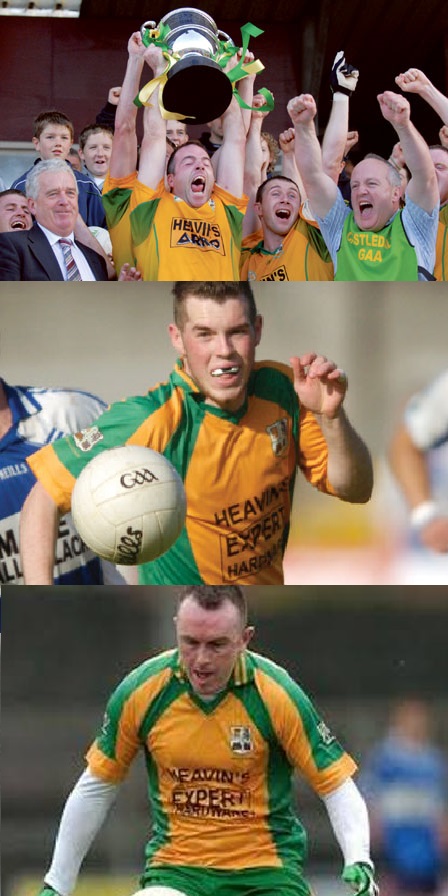 Castledaly play in the senior division in Westmeath Gaelic Football.

Joe Fallon from The Athlone Advertiser described the scenes eloquently -

"Is maith an t-anlann an t-ocras. If ever this seanfhocal rang true it was in Cusack Park last Sunday as the men from Castledaly matched an enormous hunger for victory to their fine array of skill and got their just desserts by running out deserving winners of this years Shay Murtagh senior football championship.

Having lost three deciders already this decade their appetite for success was understandable. It was also something which Garrycastle failed to match over the hour. The men in green and yellow already had rightful claims to being the most consistent team around over the past five or six years but in the absence of a county title such claims counted for little. It was little wonder then that the sound of Barry Kellys final whistle was greeted with an outpouring of emotion not seen too often in Westmeath GAA headquarters. Grown men and women were seen with tears in their eyes in the stand and on the terrace and the pitch invasion which followed set the tone for the celebrations that have lasted for much of the past week.

From a neutral point of view it was the right result too. Not just because the underdog won, but, because on the day they deserved to. When the game was up for grabs in the second half they out-fought, out-tackled, and ultimately out-scored the town side. Nobody could begrudge the likes of Ciaran Henson, Russell Casey, Niall ONeill, Derek Heavin, the Duffys, Alan Fitz, MJ McLoughlin, the Kellys, and team captain James Galvin their day in the sun. All have been great servants to their club and the club scene in Westmeath for the past number of years.

What a pity that injury intervened to deny JP Casey, their scorer-in-chief over the past ten years, a well deserved medal. The talented Kenny Larkin was another man to lose out.

The people of Castledaly love their football, as their large attendance at the final, and indeed throughout the championship, showed. Every supporter deserves a day like this at least once in their lives. Anne Connell, perhaps their best known and least vocal supporter, a woman who rarely misses a club or county fixture deserves it more than most.

There are many people who did a lot to promote the game of football in the parish of Castledaly who have since gone on to claim their eternal reward and Im sure they were smiling down from the stand in the sky on Cusack Park as James Galvin became the first Castledaly man to hold the Flanagan Cup aloft. Amongst them the legendary Ollie McLoughlin who passed away just two short months ago. His passing played no small part in gelling this team together, and no doubt hed be proud of the performance of MJ and his colleagues." Joe Fallon 2008