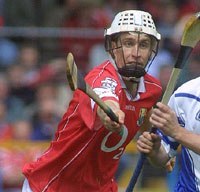 Castlelyons GAA is a Gaelic football and hurling club located in the small town of Castlelyons in east County Cork, Ireland. The club is affiliated with Cork county board and Imokilly division.