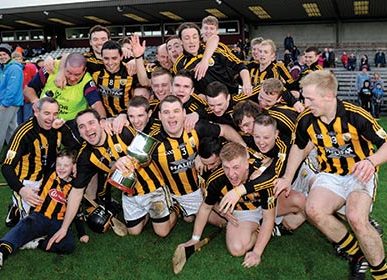 The first record of hurling being played in Castletown Geoghegan dates back to 1911 when games were played in Loughlum. These were not on an organised basis but soon after a Kilkenny man named Mick Byrne who worked with CIï¿½ at Castletown Station brought his skill and knowledge of hurling to the area. In 1920 the first team was entered in the junior championship. Since Byrne was a Kilkenny man the chosen team colours were black and amber. At this stage hurling had moved nearer to Castletown and the game was played in a field called the Planting.

Emigration was rife in the 1920s and as a result at the annual; general meeting of 1924 it was decided to disband the club. Joe Clarke, Pat Corcoran and Dan Leavy re-organised the club in 1930 and from that day to this the club has unbroken service in the county championships.