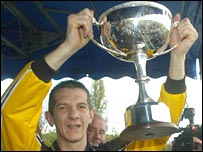 Mickey McVeigh lifts the Railway Cup after Ulster's triumph in 2004

Castlewellan GAC (also known as St Malachy's GAC, or in Irish, CLG Naomh Maolmhoig Caisleán a Mhuilinn) is a Gaelic Athletic Association Club in Castlewellan, County Down, Northern Ireland. The club promotes the Gaelic Games of Hurling, Football, Camogie and other cultural and social pursuits.The club was founded in 1905 and recently celebrated its centenary year in 2005.