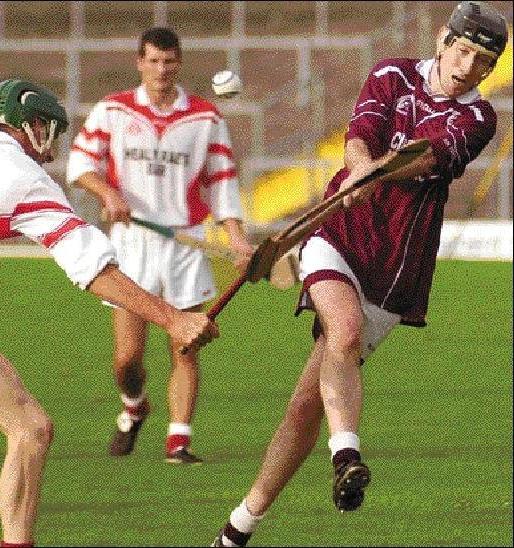 Causeway's Mark Dillane gets his shot away.

In the football-obsessed county of Kerry, hurling takes precedence in the north of the county, and Causeway G.A.A. Club is at the centre of this hurling stronghold. Notably, Causeway is the home club of Neilus Flynn, whom the current Kerry County Senior Hurling Championship Trophy is named after.

In the Mid-nineties a strong emphasis was placed on the youth of the parish and today Causeway has one of the Strongest Under-age set-ups in the county. The decade finished on a high for the club with a Co Final appearance in 1997 followed by victory in the '98 decider. After a gap of 11 years a Maurice O'Carroll led Causeway defeated Crotta in a repeat of the '79 final. In 1999 Causeway U-16's won the Club All-Ireland Shield held in Carlow.

While Causeway players have figured prominently with successful school & county teams other notable achievements which the club are proud of include Pat Moriarty, D.J. Leahy and Michael Burke representing Munster with D.J. winning a Railway Cup medal in 1985. Pat Moriaty is the sole Kerry hurler to ever be nominated for a Senior Intercounty Championship All-Star and that honour was bestowed on him in 1977. Tadgh Flynn was selected on the Fitzgibbon Team of the Year in 2005 following his achievements as the first-choice goalkeeper with the University of Limerick Fitzgibbon Cup Team. John Mike Dooley has represented Ireland twice in the Senior Shinty series in 2004 & 2005. He has also won the GPA player of the month for Feb '05 and he became the 1st Kerry Hurler to receive a Christy Ring All-Star in 2005.

Causeway had many strong underage teams in recent times, and these delivered on their promise by landing senior titles in 2019 and 2022.