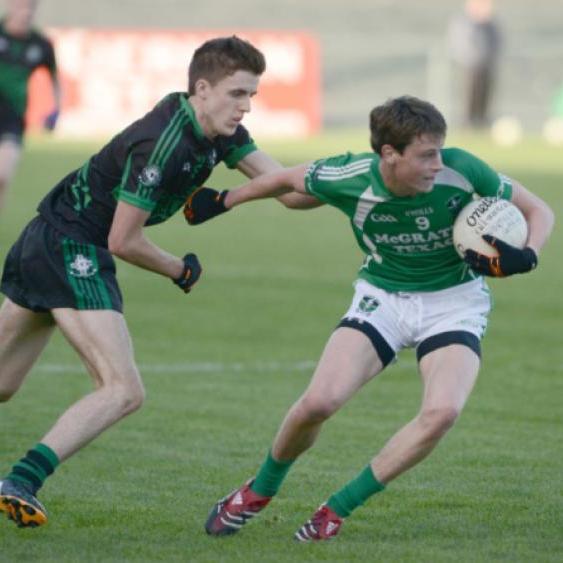 Ronan Sweeney on the ball for Clonguish

Clonguish GAA is a Gaelic football and hurling club in Newtownforbes, Co. Longford, Republic of Ireland. The club was formed on 20 October 1889. Situated in the west of Co. Longford, it is bordered by four parishes in Co. Longford, Kilashee, Templemichael (Longford), Killoe and Drumlish  the parish also shares a common boundary with the Province of Connacht in that it adjoins the parishes of Bornacoola and Gortletteragh in Co. Leitrim and Tarmonbarry in Co. Roscommon. The Irish for Clonguish is Cluain Geis which means 'The Meadow of the Swans'.

Clonguish played their games at Curry Field in the Castleforbes Estate before moving to their new ground Centenary Park in 1984. Centenary Park is now called Bertie Allen Park after one of Clonguish's and Longford's most famous GAA men. Bertie Allen Park has two full-size pitches with state of the art floodlights on the main pitch and training lights on the bottom pitch. Work has been carried out on a third pitch beside the training pitch. The facilities are state of the art with four dressing rooms with showers, weights room, two meeting rooms and an indoor soccer and basketball court. Work has also been carried out to erect a handball alley at the back of the complex.

Clonguish is one of the most recognised clubs in Longford. They hold the record of winning four Senior Championships in a row in 1962, 63, 64 and 65. They have reached the Leinster Club Championship Semi-Finals on two occasions (1973, 2003) and along with Killoe Young Emmets (2012, 2015) are the only Longford clubs to advance to the Leinster Semi Final twice.