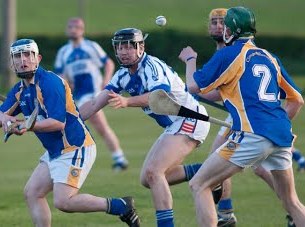 The colour of the club jersey is all blue with a gold band. Although hurling is traditionally the main code, football is being played at underage level and junior level with the upturn in Laois football.The club has changed its name a number of times and was previously known as Ballygeehan, St Canice's, Cannonswood, Ballacolla.

From 1914 to 1918, hurling was particularly strong the area with the Ballygeehan team the Laois Senior Hurling Championship, as well as supplying the bulk of the team in 1915 when Laois won its only All-Ireland Senior Hurling Championship. Mick Aherne, a famous member of the Laois senior football and hurling teams of the 1980s, is one of the best known players the club has ever produced.

During the late 1990s and the 2000s Clough/Ballacolla made great improvements underage that resulted in titles in U/14, U/16, Minor and U-21 that laid the foundation for senior honours. In 2009, Clough-Ballacolla won their first Laois Senior Hurling Championship title in 91 years. They beat Portlaoise in the final and were captained by Michael McEvoy. In 2011 Clough-Ballacolla regained the Laois Senior Hurling Championship beating Portlaoise in the final. They were captained by John A Delaney.