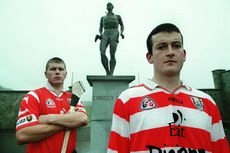 Cloyne GAA club is located in the small town of Cloyne in east County Cork, Ireland. Founded in 1887, club colours are black and red. The senior hurlers were somewhat unfortunate to make three finals in a row at a time when Cork club hurling was very competitive. They lost in 2004 to a Na Piarsigh team backboned by the O'Halpin brothers and All Star John Gardiner. The Newtownshandrun team that beat them in the 2005 final had already won a club All Ireland title while the young Erins Own team that won in 2006 would win another title in 2007.

Christy Ring one of their most famous players, played for the team before moving to play for Glen Rovers in 1941. Regarded as one of the best of all time, he was often called The Wizard of Cloyne for his hurling prowess and a statue commemorating him stands in the centre of the town.