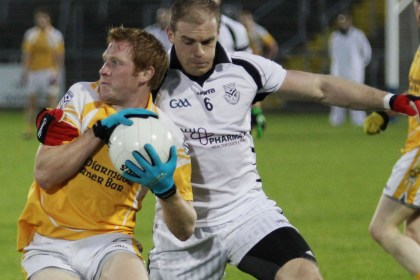 Drumalee in white strip versus Ballinagh

On 19 January 1935, the Anglo-Celt recorded the birth of Drumalee club as follows, it grew out of an informal meeting at Drumalee Cross where it was decided to start a club. The club was affiliated at the 1935 county convention.

The most successful year in the club's history was in 1969 when they won the Intermediate League and Championship and earned promotion to senior ranks for the first time. They defeated a fancied Arva team in the Championships by 1-9 to 1-6. A large crowd turned up in bad weather for the final on 5 December. They were rewarded with plenty of good football despite the bad conditions. Drumalee were a point behind at half-time after playing against the wind. They served up great football in the second half to win by 1-9 to 1-6.

Drumalee regained their senior status in 2006 winning the Cavan Intermediate Football Championship but soon they lost their Senior Status. The regained it again in 2010 beating Drumlane 1-11 to 0-08. Drumalee is also one of the smallest club in Cavan.