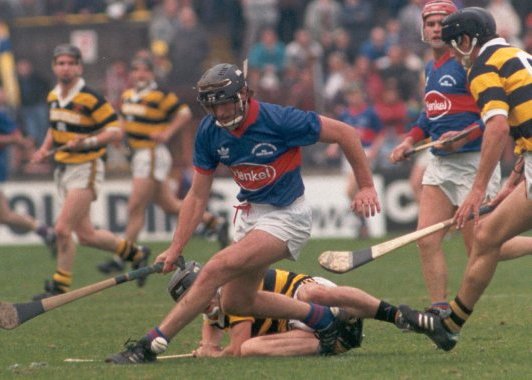 Brian Corcoran in against Na Piarsaigh 1992

Erin's Own GAA is a Gaelic Athletic Association club located in Glounthaune in east County Cork, Ireland. The club is made up of players from Little Island, Knockraha, Brooklodge and Glounthaune areas of the parish. The club caters for players at all age levels in hurling, Gaelic football, camogie and ladies football.
Erin's Own GAA Club was founded in 1963 with the amalgamation of the two parish clubs, Knockraha and Little Island. The decision to form the new club was based on a desire to strengthen Gaelic games in the parish of Glounthaune by forming one strong unit where two weaker ones previously existed. The games had been played in the Parish for well over a hundred years.
The senior hurlers have been one of the stronger teams in Cork over the last couple of decades. They won the senior titles in 1992, 2006 and 2007.
The most famous player from the club is the great Brian Corcoran. Brian has three county titles with his club, three All Ireland titles with Cork and three All Star awards. He was also hurler of the year twice, a feat matched only by Brian Whelahan and bettered by Henry Shefflin who won three. Brian was also an exceptional footballer, winning three Munster titles with Cork. He is rightly ranked one of the top GAA greats.