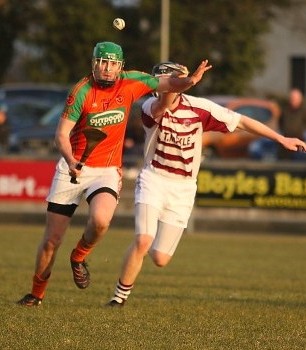 In possession versus Slaughtneil

Gaelic Athletic Association club based in the Catholic parish of Lavey, County Londonderry, Northern Ireland. The club is a member of the Derry GAA and currently cater for Gaelic football, hurling, camogie and Ladies' Gaelic football.

Between 1934 and 1935 hurling was introduced to Lavey. Fr. James McLaughlin helped launch a hurling club in Lavey by the name of Shamrocks GAC, who until the amalgamation in 1941, were officially independent from the football club. They originally wore green jerseys with a white shamrock on the breast. Because there were few hurling teams in the area, Shamrocks originally competed in the South West Antrim League with teams like Cargin, Creggan and Randalstown.

Shamrocks won Lavey's first Derry Senior Hurling Championship in 1940. The team was helped by a few playing members they had from "traditional hurling counties" such as Tipperary and Galway. 1944 was a special year for the club when they completed the "Football and hurling Double". They won the Derry Senior Football Championship beating Mitchel's of Derry City in the final, and also won the Derry Hurling Championship after defeating Sarfield's (also of Derry City).