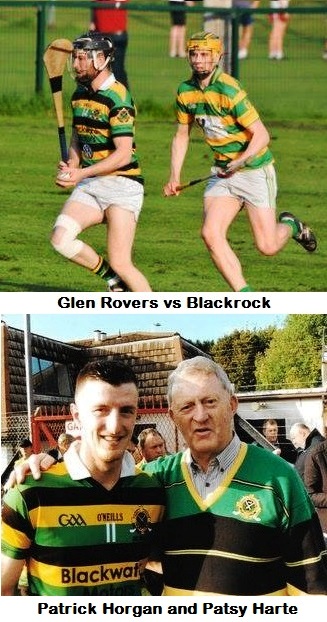 Gaelic Athletic Association club based in the Blackpool, Cork, Ireland. The club was founded in 1916 and is primarily concerned with the game of hurling. Only Blackrock have won more Cork senior hurling championships. In the early days of the club, its chosen colours were green, white and gold. The Easter Rising and the execution of the leaders took place in the same year that the Glen was founded. These events left such an impression on the minds of the Irish public that it was decided to add a black band to the jersey to honour the recently deceased patriots. This distinctive and unique hooped jersey has been used ever since. The Glen Rovers crest features a modernized Celtic cross with the image of the north side glen in the centre. The crest also features two crossed hurleys.

The 1970s saw the arrival of Glen Rovers on the provincial and national stages. 1972 saw Denis Coughlan guide the club to their first county title of the decade with a 3-15 to 1-10 victory over east Cork side Youghal. This victory allowed the club to represent Cork in the Munster Senior Club Hurling Championship. The Glen subsequently reached the provincial decider where Tipperary champions Roscrea provided the opposition. An exciting game developed between these two sides, however, the Glen were the eventual victors. The two-point win gave the Glen a second Munster club title and the chance to represent the province in the All-Ireland Senior Club Hurling Championship series. A 6-9 to 1-7 defeat of Castlegar allowed the Glen to advance to the All-Ireland final where St. Rynaghs provided the opposition. The final at Croke Park was a tough affair, however, Tom Buckley and Red Crowley powered the Glen to a 2-18 to 2-8 victory. It was the Glens first All-Ireland club title.

Glen Rovers lost their county, provincial and All-Ireland titles in 1974 before losing the 1975 county championship decider to Blackrock. The Glen bounced back in 1976 with Martin O'Doherty leading the club to a 2-7 to 0-10 victory over the Rockies. Once again this allowed the Glen to represent the county in the Munster club series. The final pitted the Cork champs against Limerick side South Liberties. After an entertaining hour of hurling the Glen emerged victorious by 2-8 to 2-4. It was the clubs third Munster title. Facile wins in the All-Ireland quarter and semi-finals resulted in the Glen taking on Camross in the All-Ireland decider. Nine survivors from the 1973 All-Ireland victory powered the Glen to a 2-12 to 0-8 win over the Laois champions who were inspired by the Cuddy family. It was their second All-Ireland club title.

Good times returned in 2015 when the county title was won by beating Sarsfields in the final. Their dominance was underlined the following year when they completed the back to back by beating Glen Rovers in the decider.