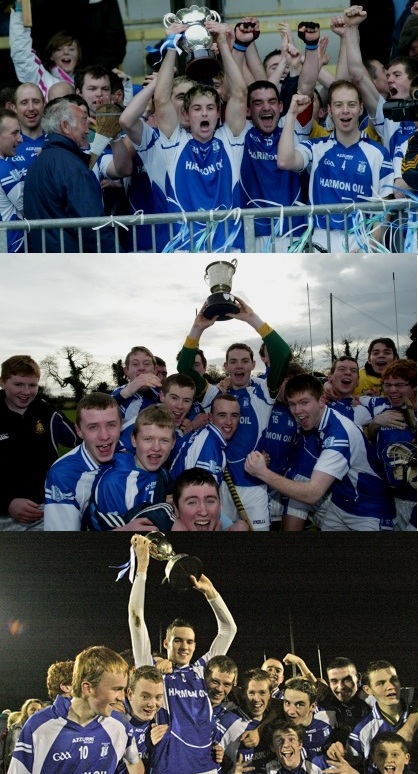 Although there was a football club in Kildalkey in the early part of the 1900's, it wasn't until 1910 that Kildalkey Hurling Club was founded. The Club became affiliated in 1922 thanks to John Davy who moved to the village in 1921 and had its first success in 1927 by winning the Minor Hurling Championship when they overcame Dunboyne in the final.

This was followed by the Club's first Junior Championship in 1930. Because there was so much interest in hurling in the village, it was in 1935 that two teams were formed. The village team was called St Dympna, after Kildalkey's adopted patron Saint, and the other team was called the Rovers and was situated in Baskinagh. Both teams met in the divisional final of 1937 with the Rovers winning out. They went on to win the Junior Championship that year.

The club was promoted to Senior level for the 1951 season and reached their first Senior final that year. Although Kilmessan won the game after fielding very late, the title was awarded to Kildalkey.

The Clubs present ground, known as Fr. Plunkett Park, was purchased in 1951 for the sum of 205 pounds and consists of some 6 acres purchased from the Land Commission. The official opening took place on Sunday 15th May, 1960 where Meath and Kildare played a Senior Football challenge match. The park was named Father Plunkett Memorial Park in memory of the curate who was chairman of the fund raising committee.

Kildalkey Hurling Club achieved a number of notable underage successes since the 80's/90's which paved the way for Senior success. The arrival of manager Pat O'Halloran in 2007 has helped spur on the Club's successes since then. Formerly manager with Keady, he guided them to Armagh County title and Ulster provincial success in that year. Since 2008 the club has gone from strength to strength with another Junior Hurling 2 Championship victory. Also in 2008, another Senior Hurling Championship final appearance was achieved with Kildalkey losing out to Kilmessan after a reply.

The club had to wait a long time to add to the 1951 victory but they ended the famine in style by winning three senior county titles in a row. The senior hurlers are now one of the strongest teams in Meath.