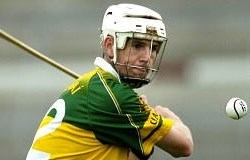 Kilmoyley are a Gaelic Athletic Association club in County Kerry. They are located in North Kerry, the main Hurling area of Kerry. They are one of the most successful hurling clubs in Kerry and are primarily concerned with the game of hurling. The club competes in competitions organized by Kerry GAA county board and the North Division hurling board.

Kilmoyley have in the past been trianed by Clare's Anthony Daly and Cork's John Meyler.

Their most famous players are Shane Brick and Tom Collins. Shane has won six County Championship medals in 2001-2004 and 2009-09, He was captain of the 2004 winning team. He was man of the match in three of the wins. In 1956, Collins earned a place in GAA history by playing in three Munster Finals in one day. He played corner forward with the Junior Hurlers as they beat Waterford 6-07 to 0-03, then again in the corner for the Junior Footballers as they also beat Waterford 4-10 to 1-04, however he could not make it 3 out of 3 as he came on as a sub in the replayed Munster Senior Hurling Championship Final only for Kerry to go down to Cork by 1-08 to 1-07.