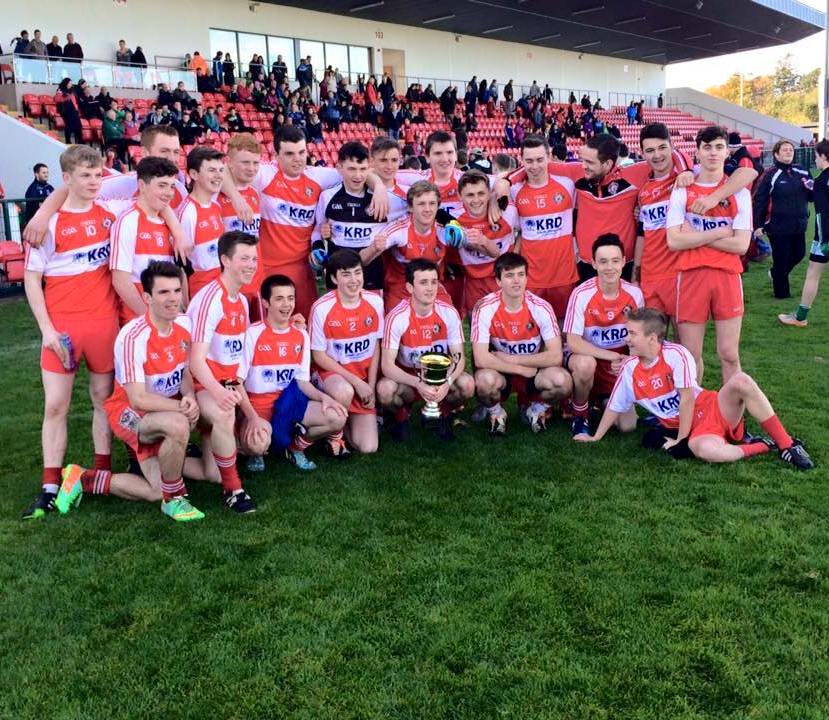 The under 16's celebrate victory

The first Kilrea Gaelic football club was established on the 15 November 1943. The club was named O'Cahan's Kilrea and played in blue and gold jerseys. Many of the inaugural Minor team of 1946 went on to help Kilrea win the Junior Championship in 1951. In the early 1950s the club changed its name to the Kevin Barry's, named after the patriot Kevin Barry and played in black and amber colours. Its nickname was "the B's".

Soon after, in 1956, the current club, Pádraig Pearse's GAC Kilrea, was formed, and chose to play in red and white jerseys. The club won Junior League and South Derry Championships before moving to compete in Senior football in 1958.

In 1966 the Pearses won the inaugural Under 16 Championship. Part of that team was Martin O'Neill, who would later go onto play professional soccer and manage Glasgow Celtic and Aston Villa. Members of this team went on to win the County Minor title in 1970. The club won the 1971 Derry Junior Football Championship and won the Derry Intermediate Championship four years later.

By 1979 Kilrea's fortunes were waning, and it went into decline at all age levels for some 15 years. Recently the club has been successful at all under-age levels, but this has not transferred itself to the Senior stage, evidenced by the fact that the Derry Senior Football Championship still eludes the club.