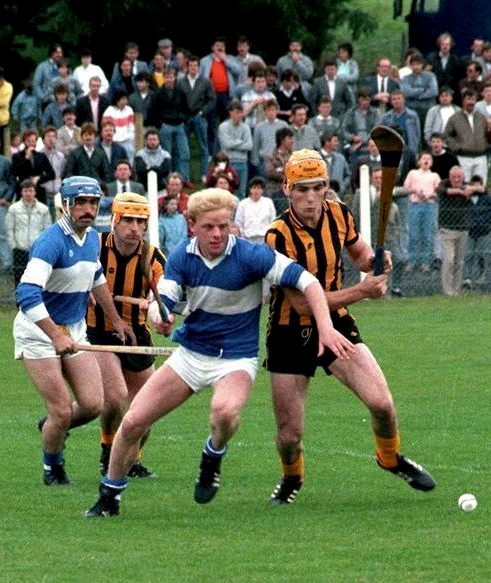 McQuilllan vs St John's from a few years back

Founded in 1907, the club is affiliated with the Antrim county board. The club participates in both hurling and Gaelic football but is known primarily for its hurling successes. They play their home matches at Páirc Mac Uílín which has also hosted the Antrim Senior Hurlers in recent years due to the ongoing redevelopment of Casement Park.

Since its inception over 100 years ago McQuillan GAC has made a huge contribution to the tradition of hurling encouraging and nurturing the ancient art and providing a steady stream of hurlers to represent club, county and nation. The club won its first title the North Antrim Senior Hurling Championship in 1909 and its first County Senior Hurling Championship in 1913.

McQuillan GAC is the only Antrim club to have received two All Star Awards and club players were elected all star replacements on a further six occasions. Dessie Donnelly won an All Star at corner back in 1989 and Paul McKillen won his at midfield in 1993. Club players represented Ireland in various other capacities on six additional occasions. Fifteen club players have represented Antrim in All Ireland Finals; seven at senior grade and three were selected on the 1984 Team of the Century.

Locally known as "The Town", they were the first Antrim team to complete two "hat tricks of wins in 195254, and 197880. Eddie Donnellys eight championship medals is a club record and ranks highly in the County. In 1980 McQuillan GAC were the first Antrim team to contest an All Ireland Club Final. In 1986 McQuillan GAC made a clean sweep of County Senior and Senior Reserve Championships and League titles along with the Ulster Club Hurling Championship.