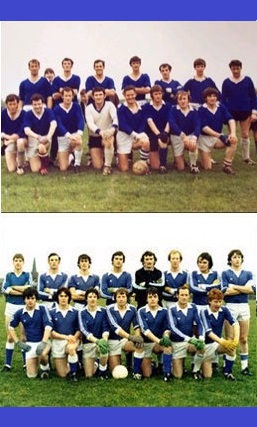 The oldest record of a Milltown Gaa Club dates back as far as 1888 when Milltown John O'Keanes (named after the famous local man who was forced to leave his native country on a Fenian emigrant ship in the late 1860's) played Dunmore McHales on the 6th of april, defeating them 0-4 to 0-1.

By 1901 there was a new club in existence, Milltown Erin's Hope. In a report of a match played on August 17th the Milltown side beat Tuam Emeralds 2-3 to 2-0. It also says that an un-named Milltown captain called for the Harp for Erin as the referee conducted the toss-up leading to the newly named club.

It wasn't until 1953 that the club was re-established, originally called Milltown St. Malachy's. The first team to represent the newly-founded club was a junior side that played Kilconly GAA on the 12th of April 1953, however Kilconly won the game 2-3 to 0-3. On May 17th however, in their second match, they defeated Cortoon Shamrocks in a league game 3-6 to 0-3 at Brownesgrove.

In 1953 they won their first trophy when they beat Ahascragh 1-7 to 2-1 in the Galway Junior North Board Championship Final Replay (drawing the first match with seven points each), however they were stripped of their title and suspended for 12 months for fielding an illegal player, a Co. Longford man who worked as a barman in Tommy Hannon's pub in Vicar Street, Tuam.

It wasn't until 1961 that Milltown won their first Galway Junior County Championship making history having to win it twice. After winning the North Board final they went straight through to the County final defeating Ballinasloe GAA by 6-8 to 1-2. They didn't play a semi-final with the opposition, Clonbur not being able to field a team but after an objection by Clonbur they were given a refixture which Milltown won by 0-10 to 0-2 on New Years Day 1962. This became the first GAA result to be announced on the new RTÉ television channel which was opened that same day.

1983 saw three Milltown men representing their county in the infamous ' Game of Shame ' 1983 All-Ireland Senior Football Championship Final against Dublin GAA. The three Milltown players on the starting fifteen were Padraig Coyne, Tomás Tierney and Gay McManus. Galway lost that day with a scoreline of 1-10 to 1-8.