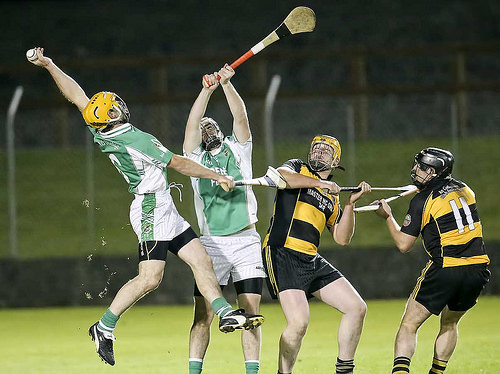 Modeligo fielding the ball vs Colligan

The club which was founded in 1977 represents the parish of Modeligo & at underage level they are represented by Naomh Brid. The clubs' most notable successes at adult level are winning the Waterford county Junior Football Championship in 1996 defeating St Mollerans & the county Junior Hurling Championship in 2008 defeating Fenor. In 2014, the club won its second county Junior Hurling title and later won the Munster title with a victory over Cork champions Castlemartyr, on a scoreline of 512 to 014 at Mallow. The club colours are green & white.

In 2014, the club won its second county Junior Hurling title and later won the Munster title with a win over Cork side Castlemartyr on a scoreline of 512 to 014 at Mallow. In January 2015 the team and supporters made the trip to Birmingham, England to play the All Ireland quarter final against Fullen Gaels. A very close game ensued, with the British based team emerging victorious by 2-6 to 0-10. The following year also proved to be a very successful one for Modeligo. The club captured the Western Intermediate league and also the western Intermediate hurling title beating Clashmore, before going down to Portlaw in the county final. The County Junior Football title was also captured after 19 years, with victory over Colligan Emmetts in the western final and Roanmore in the county final.