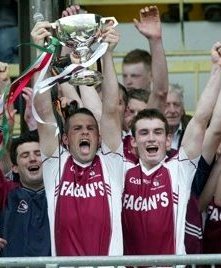 Moynalvey GFC represents the parish of Moynalvey & Kiltale and is situated in south east Meath with a population of approximately 1,700 people. The famous writings The Four Masters say the name Moynalvey is derived from a womans name Ailbhe as Magh  Ailbhe or Ailbhes Plain.

The first club in Moynalvey was formed in 1934 by Jim Crickley, Peter Brien and Richard Dobbins Walsh and played under the name of College Park. One of the mainstays of the team in the early days was Jimmy Reilly who played at full forward for Meath for a number of years.

The club changed its name to Moynalvey in 1938 and continued to take part in adult competitions until the early fifties without any notable success.

Following the return to the Intermediate ranks in 2009 Moynalvey held their own at that level before the club regained its Senior status once again when claiming the Intermediate Championship in 2011, defeating Gaeil Colmcille in the final. Moynalvey went on to represent Meath in the AIB Leinster Intermediate club football championship only to fall at the first hurdle when going down to the Louth Intermediate champions ORaghaillaighs.

The club is proud to have in their ranks players to have represented Meath at Minor, Under 21 and Senior level. Liam Harnan represented the club with pride and has 2 All Ireland medals whilst Cathal and Barry Sheridan and Willie Byrne are also holders of All Ireland medals at various age groups. Other players to represent Meath over the years include Robbie Melia, Aidan Crickley, Paddy Kelly, Paul Harnan, Declan Tuite, Tommy Fay and Adrian OHalloran, whilst present day players John Donoghue and Mark OSullivan are the most recent members of the Club to have represented Meath at adult level.