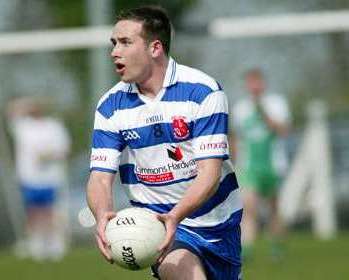 Navan O'Mahonys is a Gaelic Athletic Association club located in the town of Navan in County Meath, Ireland. The club competes in Meath competitions. With 20 Senior Football wins they are the most successful football club in Meath. The club was founded in 1948. Club colours are white and blue hoops.

It was agreed that the name of the club should be Navan O'Mahonys after the Navan Pierce Mahonys which was formed in September 1887 and derived its name from Pierce O'Mahony M.P. for north Meath, a Parnellite and advocate of home rule. In choosing the name they were honouring a club which was one of the most successful in the county and also what Pierce O'Mahony stood for at the time - home rule. The Pierce Mahonys won the Meath Championship in 1894 and 1895. In fact in 1895 Pierce Mahonys carried the banner for Meath and contested the All Ireland Final against Arravale Rovers from Tipperary, only to lose in controversial circumstances. Incidentally this was the first final to be played in what we know today as Croke Park.

A number of players from Navan O'Mahonys have represented Meath at inter-county level in both Hurling and Football. Including Peter McDermott who captained the 1954 Meath All-Ireland winning team. Other notable players include Joe Cassells, Stephen Bray, Kevin Reilly, Gary O'Brien, Cormac McGuinness and Mark Ward