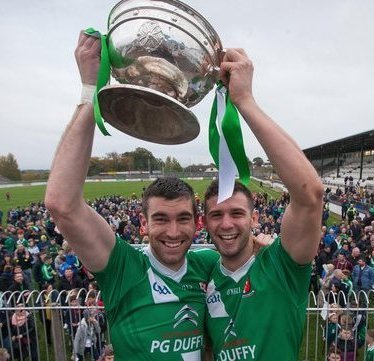 Sarsfields is a Gaelic Athletic Association club based in Newbridge in County Kildare, founded in 1897 and winner of 25 Kildare Senior Football Championships. The club name is linked to Patrick Sarsfield's castle in the area and the colours, green with white sash, were based on the colours allegedly worn by Sarsfield's men.

Sons of Sarsfields, originally based in Roseberry near Newbridge College a mile outside the North-Eastern end of the town was founded by W. P. O'Sullivan in 1897. The club is now based at Rickardstown, Newbridge. The club was an amalgamation of players from other GAA clubs who decided to group together and form a stronger team to take on the challenge of the 'mighty' Clane who dominated Kildare GAA at the time.

Sarsfields' came closest to a Leinster title came in 2005, when they beat Eire Og of Carlow and Mattock Rangers of Louth but lost the Leinster final to Kilmacud Crokes 009 to 0-10, having trailed 0-8 to 0-3 at half-time and fought back bravely in the second half. They lost the 1999 final to Na Fianna of Dublin.