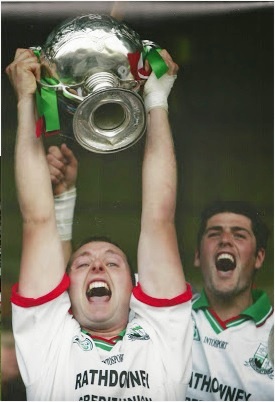 The club was created in 2005 by the complete amalgamation at all levels of hurling of neighbouring clubs Errill and Rathdowney. Both the Rathdowney and Errill Clubs remain as separate football clubs competing in the Laois Junior 'B' Football Championship. The club colours are green and red.

In 2006 the Rathdowney-Errill team won the Laois Senior Hurling Championship for the first time, defeating Tinnahinch. Liam Wynne captained the club and became the first man from the parish to captain a county senior hurling championship winning team since 1952. They repeated the feat in 2008 after a final against Portlaoise which Rathdowney-Errill won on a score of 1-19 to 2-15, and were captained by John Purcell.

In 2010 Liam Tynan captained Rathdowney-Errill to their third Laois Senior Hurling Championship, becoming the third Errill man to do so. They defeated Camross.

Shane Dollard became the first Rathdowney man to bring the Bob O'Keefe trophy across the Gully when he captained Rathdowney-Errill to a Senior County title victory over Clough-Ballacolla, in 2012.

In 2014, the club recorded their fifth Senior County title, defeating Camross in the final on a score of 1-20 to 0-10. Alan Delaney captained the side. This title added to their All County League Division 1 Title also in 2014 to complete a famous double. In the Leinster Club Championship of 2014 they were narrowly defeated by Kilmacud Crokes (Dublin) in extra time at the quarter final stage.

Prior to amalgamating Rathdowney had 18 senior club titles and Errill had 2.