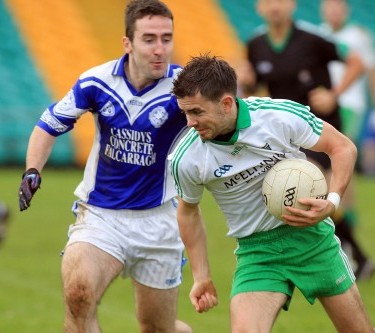 Gaelic football in the Twin Towns can be traced back to 1916. A group of men decided to set up a GAA club and Ballybofey Eire OgĀ’s was formed. There was always a keen and friendly rivalry between players of the Twin Towns and it was hardly surprising that a second club, Stranorlar Sarsfields was formed soon after. Both teams competed in the Finn Valley League, a competition organised by the late Dennis Gallagher.

The two clubs continued their hectic rivalry for the next decade, until experience and pragmatism told, and it was decided to amalgamate the clubs. In Oct 1926 at a joint meeting of the two clubs, a new club was formed called ErinĀ’s Hope. The Ā“HopesĀ” had no permanent home ground until a pitch was located at Drumboe. Plans were still afoot to purchase a more locally situated pitch in Ballybofey.

In 1946, as part of Ā“Civic WeekĀ”, a match was held between Donegal and Sligo. This was such a success that a Park committee was formed and our present grounds were finally secured.

On Sunday 1st May 1949, Sean Mac Cumhaill passed away in Donegal Hospital. Soon after it was decided to name the new Park as Sean mac Cumhaill Park, in memory of the man who had done so much for the GAA in the Twin Towns. Sunday Aprill 22nd saw Mac Cumhaill Park officially opened by the President of the GAA. A plague was unveiled and ErinĀ’s Hope changed their name to Mac Cumhaills.