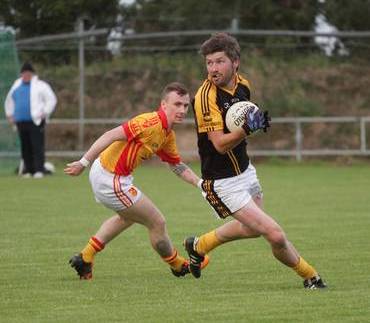 The earliest report of a match involving Adamstown played after the official founding was in hurling against Boolavogue in 1887 that stated "Adamstown lost the match but they still looked resplendent in their white and green jerseys and caps".

One of the first recorded Gaelic football matches involving Adamstown after the official founding was against Mulgannon in 1888, and they also played the famous Blues and Whites club from Wexford town in July of 1889 at Bridgetown.

A team representing Adamstown were beaten by Ballymurn in the county junior hurling final of 1916. Gaelic games were at a low ebb for a period following the 1916 rising, the arrival of the black and tans, and the civil war.

In 1923 groups of young men began to reappear with their hurley sticks in fields around Old Court, Carrigbyrne and Ballyclemock, which led to a parish league being organised from which the best were picked to form an Adamstown team..

The golden era followed between 1925 and 1942 when 11 county senior hurling titles were won and much more besides.

Gaelic games still thrive in the area and long may this continue.