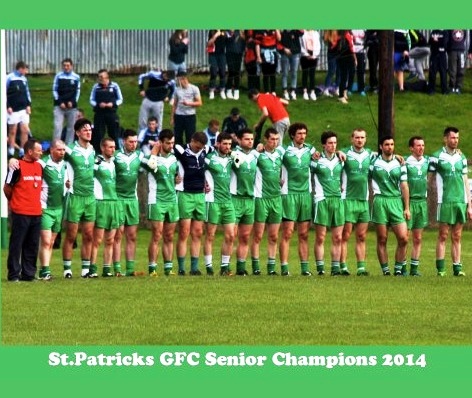 St.Patricks GFC was founded at a meeting in Mountpleasant in January 1953. On that occasion 27 people from all parts gathered with the intention of forming a club to preserve the GAA tradition in the Parish of Lordship and Ballymascanlon. Gaelic football had been played in the parish since the foundation of the GAA in 1887 with the likes of Ravensdale Mountaineers, Bellurgan Gladstonians and Lordship among the first clubs in the newly founded association.

At the meeting in 1953 it was decided to enter a team from the Parish in the Second Division grade and Minor grades. Following a proposal from Sean Burke of Castletowncooley, the new club adapted the name, St.Patrick's GFC and they became the 14th team to represent the parish.

Initially the Minor team were maroon and white, while the Second Division team played in black and amber, before the famous green and white colours were adopted.

St Patrick's has been the dominant club in Louth over the last decade or so appearing in eight finals since 2003 and winning an impressive seven of those.