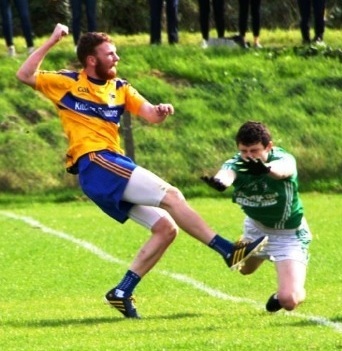 Getting a shot away vs Cargin

St Teresas was founded in 1963. St Teresa's originally played in blue-amber-blue. These colours were selected by Bro O'Connell, principal of CBS at the time who was from Tipperary. The club enjoyed almost immediate success securing 3 county minor titles in the years 69-71. The success of these teams fed into the newly formed senior setup. The senior team enjoyed a meteoric rise through the All county football divisions rising from div 6 to div 2 in successive years. Following a narrow defeat in the replayed county final of 1976, the club finally secured their first Senior county title beating local rivals St Johns in the 1979 final.

In the early 80s focus turned to securing a permanent home on the Glen Road. In 1992 a 100 year lease was signed for A 10½ site. In 1998 two grass playing pitches were opened by Jimmy Barry Murphy and the Cork hurling team, named McDonell/Doherty Park. Inevitably, whilst most efforts were concerned with providing facilities, the playing side was neglected. Despite securing an intermediate football title in 1993, the senior football team slipped into Div 3 at the turn of the millennium. . It was left to the hurlers to keep the club name prominent. In 2005, a Junior hurling title was annexed. The feat was repeated in 2008. Not to be outdone, the footballers secured the 2009 Junior title to ensure a return to the intermediate ranks. St Teresas returned to division 2 in 2012 after a 14 year absence.

A celebration of 50 years in 2013, was capped with acclaimed success on the playing fields. In the last club game to be played at the old Casement Park, St Teresa's defeated local rivals Rossa in the Beringer Cup final.