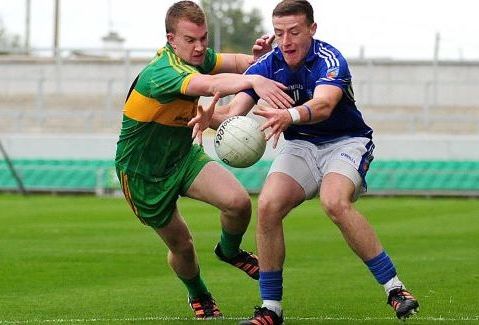 GAA club located in the town of Tullamore, County Offaly. Founded in 1888, club colours are blue and white. Tullamore is a dual club, competing strongly in both Gaelic football and hurling. Home games are played at O'Brien Park and O'Connor Park.

Red was the initial colour club colour but then they changed to green white and gold inspired by the 1916 rising. However in the early 1920's Tullamore stopped wearing the green, white and gold jersey s and instead gave the right to wear them to the Offaly county team. At that point, Tullamore teams took to the field wearing plain green jerseys. Now at the end of the 1930's, further change came as Tullamore adopted a royal blue jersey with white collars and white cuffs. The Greens were now the blues and this was how they were to stay.

Tullamore are second top of the Offaly Gaelic football role of honour, after Rhode.